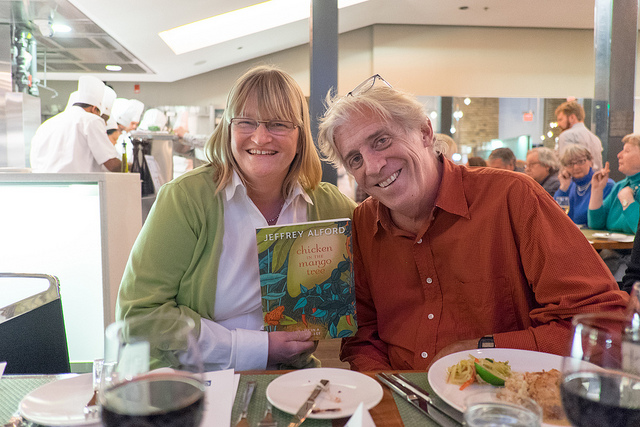 Jeffrey Alford has done something I can never do.

As much as I like exploring every nook and cranny – urban or countryside, I’m most comfortable when surrounded by the comforts and conveniences of a city. There’s roughing it, and then there’s leaving it all.

Which is exactly what Alford had done.

Known most for the cookbooks he co-authored with Naomi Dugui, the American-born Canadian food writer also shares the James Beard Cookbook of the Year Award win for both Flatbreads & Flavors (1996) and Hot Sour Salty Sweet (2001). The duo’s Seductions of Rice (1999) and HomeBaking: The Artful Mix of Flour and Tradition Around the World (2004), had both won a Cuisine Canada Cookbook Award. He’d also published in many Canadian and American food magazines, including now defunct Gourmet, Food & Wine, and the National Post; and has appeared on various television programs.

The prolific writer was in town to promote his paperback, Chicken in the Mango Tree: Food and Life in a Thai-Khmer Village – a non-fiction which straddles both cookbook and memoir of his new life in Kravan, a village near the Cambodia border. The text and non-stereotypical recipes – from eating fresh plucked tree leaves to cooking crickets – are tucked among pages and pages drenched in rich, colourful images, photographed by Alford. Most of the recipes are a guideline to cooking; more than a protocol, they help tell the story of the people he’s met, of his immersion into the Thai-Khmer culture and, most notably, those culinary traditions.

While in Toronto, Alford appeared at George Brown College‘s Chefs’ House for the Trending NOW dinner series, where he chatted with food lovers, program supporters and students about his experiences in Thailand. I had the fortune of sitting across from Alford during dinner – a sincere treat because it would be hard pressed to find anyone with more stories, than a known storyteller and world traveler! It got to a point where I felt bad because everyone at the table would have cleared plates while Alford’s was still full of food because we had him telling us tales after tale.

Besides admitting the book took five years to write (despite it covering the first year of his residency), partly due to the remoteness of the village he lived in and the general lack of technology/internet, Alford notes the lifestyle is rather simple, with plenty of routine, and less driven by convenience. Essentially, a repose from the lifestyle he had once led.

He tells us he’s made other non-Thai or Cambodian friends who have found new lives, and wives, in Thailand. How they all fell in love with the country, and are happy to take many steps back from the busy lives they led in the West. He now lives frugally in Thailand, free of many worldly possessions.

The celebrated cookbook author mimicked how his wife Pea’s would pound (with mortar and pestle) shallots, fresh chilies and garlic to make nam jeem every day, using the same fiery condiment accompanying every meal. Then confessed that even though he has trouble handling the heat, and despite years of choking back tears in response to it, Pea would continue to prepare nam jeem and nearly every dish to Thai-spice level.

We learned about the diverse and edible wild flora*; how dishes such as the nam prik gai sai mamuang, a green curry number is actually supposed to be smushed to a coalesced mash (like less soupy congee) you’d eat with your hands and not a separate curry and meat course, accompanied by rice, which we’re so used to seeing.

He shared tales with Julia Child(!!) and Martha Stewart(!), and how he had appeared frequently on the Martha Stewart Show. But nothing compared to the nonchalant manner he recounted his opportunities, via interest from “Martha,” to explore a culinary travel show which would have made him a household name the way of Anthony Bourdain. Then 9/11 happened. Out of concern that it would disrespect those sensitive to air travel (had he proposed a show which involved traversing the globe), he tabled that pitch, along with the opportunity. A year later A Cook’s Tour launched. Already blessed with an enviable bank of work, could you imagine the stories we would have gleaned from his worldly adventures there?

Before we said our evening goodbyes (and before Alford and his merry group of energetic friends went dancing!), Alford shared with us the origins of the book’s unique title. Initially he had named the paperback after his wife, but she felt that it would sound inappropriate given that her name might suggest other things phonetically. (In fact, Alford had misspelled her name throughout his manuscript as Pee, which she found rather unimpressive.) Instead, he renamed the anthology after their defiant chicken, the one who nightly refuses to return to the comforts of the rice barn with the rest of its flock, and instead leaps into the lower branches of a mango tree to sleep there. It’s the chicken in the mango tree.

Some might say it’s also a metaphor for Alford.

* I’ve always found indigenous/wild plants fascinating, so this impromptu lesson was a highlight. The glutton in me is curious about the world of unexplored flavours; the inner Girl Guide keen on “being prepared” in any situation. In fact, my favourite part of Chicken in the Mango Tree is the appendix, a long list of “botanicals” (edible tree leaves, wild herbs, and plants without Western origin) used in regional cooking. Oh, how I long to try them!

Rebecca Tucker‘s FB chat with Alford for National Post (March 2015): Why Jeffrey Alford left the comforts of Toronto for a Thai adventure

Alford’s blog filled with his own vibrant photography: Jeffrey Alford

Renée Suen is a food loving freelance writer and photographer based in Toronto. Her insatiable appetite, curiosity and camera are often found travelling around the world in search of memorable tastes and the stories behind the plate. In another life, she is a PhD candidate in Cardiovascular Sciences.
View all posts by Renée Suen »
« Scott Vivian
Stories in Progress: Terroir 2015 – Pioneering Change & Chefs for Oceans »