While chatting with chef Normand Laprise of Montreal’s Toqué recently about an upcoming trip I was taking to his hometown of Kamouraska, on the south shore of the Saint Lawrence River in the Bas-Saint-Laurent region of Quebec, I was encouraged to take time to visit La Société de Plantes.

Chef Laprise mentioned that I should contact Patrice Fortier, seed saver and proprietor of the heirloom foods company.

Besides his enthusiasm for the plants (to save the varietals), he experiments and plays with the varietals to create new recipes or ways they can be used as food, or even to discover new and edible uses for the different plant parts.

It was an educational early evening visit where I learned that weeding can be considered a great thing. Not only is the produce freshly harvested, but it can be had sans commute or traffic (thanks, Periscope Mike for that observation). Even better, snacking in the garden is encouraged.

I encountered a bunch of new to me plants/flavours, but also plants I was familiar with but didn’t recognize in their overgrown form. I was surprised to learn that unique varieties like the oyster leaf and ice plant are available in the country; and quickly picked up packages of seeds so that I could grow my own source of interesting (and delicious) vegetation that I’ve previously enjoyed.

Tender broad bean leaves from the top of the plant.

Patrice Fortier sharing some of his knowledge with Periscope viewers and I.

Besides flavour pairings, I found it wild to learn of new ways to prepare plant parts that I had considered inedible (i.e. broad bean top leaves, or borage leaves which are packed full of nutrients. The latter tasting like “sweet dope”) or beneficial (i.e. wormwood is an effective insect repellent, but as Periscope Mike noted, also attracts humans when made into absinthe).

Fortier also shared how he selects seeds for saving, and a few growing tips that would help produce plants with desirable flavours.

I learned so much from the short 45-minute visit (documented here). Imagine if it were longer! I hope to have another opportunity one day.

For those interested in heirloom foods and wild flavours, who are into growing their own foods, and learn about cool lesser known ingredients available in Canada, you’ve got to watch this. 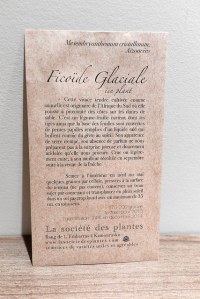 The (rare) Ice Plant seeds I picked up from Patrice.

The Periscope broadcast (on YouTube): Patrice Fortier of La Société Des Plantes (June 2015)
My apologies for the pixelated quality (thanks, iPhone 4s), however the content (minus shots of me “sampling” the garden) is really educational and interesting. Note: since it is a Periscope broadcast, part of my conversation was with viewers in case anyone was wondering why I was conversing with others who aren’t present in the video.

Renée Suen is a food loving freelance writer and photographer based in Toronto. Her insatiable appetite, curiosity and camera are often found travelling around the world in search of memorable tastes and the stories behind the plate. In another life, she is a PhD candidate in Cardiovascular Sciences.
View all posts by Renée Suen »
« Corey Lee
Toronto’s New Sweets Brigade: David Chow, Stephanie Duong, Christinn Hua, Cori Murphy, and Sanober Motiwala »