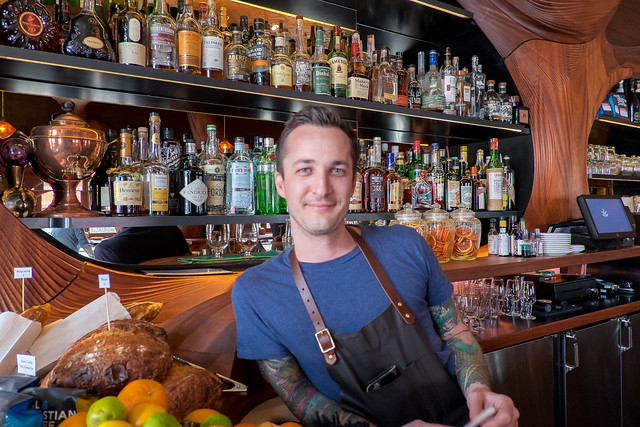 Many years ago, when a cook by the name of Grant van Gameren took over the stoves of this tucked away space on Dundas West (gasp!) which didn’t take reservations (double gasp!), few would have guessed that he would lead the next wave of independent chef-owners in turning Toronto into a culinary destination.

In no way would I ever claim to have seen something in the chef before anyone else, but I do recall thinking he would be a great subject for a profile, especially since I did notice (I will take some credit here) that the Toronto audience was starting to take interest in the person behind the plate.

So I pitched the interview to one of my editors at the time, and he approved of the piece. I spoke with the young(er) van Gameren who was really generous with his time and sharing his story.

Not more than a few weeks after, I stumbled upon a near identical interview, but in Q&A style on a minimalistic attractive new website, Acquired Taste. I remember being mortified – in case my piece were to run shortly after, and being accused of plagiarism. I spoke to the publication’s founder (it was still small then), Chuck Ortiz, a former cook and caterer who found his calling in photography and content production (another story to be saved for a future date), who was very understanding about the coincidence.

The publication didn’t end up running the story (and I didn’t pitch it anywhere else), but I did make a new acquaintance and start a nice friendship. Which could be the end of this tangent of a story.

But just like how it’s fun (or cheesy) to dig up old time capsules, I thought it might be a(n embarrassingly) fun thing to put up on the blog in light of the latest feature in my column for SingTao’s 星尚EliteGen. For those who have been living under a rock, the talented chef is co-owner of, not one, but two of the country’s hottest Iberian-influenced restaurants since my little profile from almost five years ago. What makes this post relevant is how some of what we talked about seemed to foreshadow what was to come. Maybe it’s just grasping at straws, but that would be for the reader to decide.

Also, the Q&A on Acquired Taste is no longer up.

The write-up, unedited with expired web-link and all (please, be gentle), from early 2011.

For more in-depth profiles, please see the associated links below:

He was, also, early in his career, a serious snake breeder. van Gameren explains in Vice Munchies: How Breeding Snakes Made Me a Better Chef

van Gameren in his kitchen shortly after he opened Bar Isabel in 2013.

It still doesn’t take reservations or credit cards, but placements on numerous “best of” lists and a colubrine line of charcuterie worshipers at its doors testify that The Black Hoof is here to stay.  We recently spoke with Grant van Gameren, chef and co-owner of the esteemed establishments, about all that’s transpired in recent months.

Having never had formal culinary school training, van Gameren discovered his calling while working in some of the city’s notable kitchens.  “At a time I was working with both molecular gastronomy and charcuterie, two completely different styles of cooking – one’s a severe manipulation of food; the other is a technique that’s hundreds of years old.  It was during that period of time that I realized I preferred doing artisanal work – where you make something and you have to wait six months to see if it’s good.  That really intrigued me.  When I came up with the idea [of The Black Hoof] I kind of disregarded all the people who didn’t see how I could make money from it; instead I pictured the vibe, the room, how it would go and thank God it’s worked.”

Indeed it has, as even Thomas Keller took notice.  It was the only time van Gameren held a table for anyone (“even Madonna can stand in line”).  Unfortunately, Keller couldn’t make it.  Questioned if he would break The Hoof rules again, van Gameren tells us without hesitation it would be for Mario Batali, telling with us how a meal at Babbo motivated the young chef to follow his heart.  It’s the least that van Gameren can do for the chef who he considers “a solid cook, who is doing what he wants, with food that inspires.”

van Gameren with Lucy Waverman in 2011 at a modernist cuisine demo at Nella Cucina.

Regarding the accolades, we’re told that it’s exceeded any expectations: “the press, chefs coming in… it’s amazing that it’s happened. But now is the time that we’ve really got to pick up the game, come up with new menu items, keep on delivering good service and that kind of stuff.  We want to be known as a spot that makes good food and truly care about it (all staff members even the dishwasher).”

The humble chef tells us that he’s still in the process of learning and confessed that he’s not even 5% of where he wants to be.  However, he shares the credit of his culinary success with his experienced staff, including Geoff Hopgood (ex-Fuel of Vancouver), telling us that The Hoof encourages talented cooking.  “We’re working in an environment where you can learn a lot and turn nothing into something. This is the breeding ground for knowledge, sharing, communication and helping each other out – like the guys from the Cross Town Kitchens – I think that’s really how the Toronto culinary scene should be.  We need more young chefs coming together and I don’t think you have that in New York and stuff like that where everyone’s competing for business.  People want to be in the kitchen right now, even on their day off, and screw around with a new recipe.  So that’s what we’re about – seven days a week, 24 hours a day institution where people want to learn, cook, and serve good food.”

Having just opened the equally popular The Hoof Cafe with Hoof co-owner Jen Agg, the self-proclaimed work-a-holic is already speaking of future projects, including a facility/small retail shop (“for people who want something truly artisanal, maybe something to take home; but nothing like Mario Pingue [of Niagara Food Specialties]”).  van Gameren wants to have the ability to invest in his own staff, and give them “the chance to be young owners and experience what Jen and I had.”

“You don’t need to travel the world, work for twenty chefs for shit pay or free.  You just need to invest your time, knowledge and learning capabilities.  When I have a stage – you know, when someone wants to come work in the restaurant for free just to learn – I’m like here, make the salami, have fun.  That means a lot to me, and that’s the kind of staff I want.   Why would you deny people that?  I want them to come, to learn and then do their own thing.”

Eventually van Gameren (who hasn’t been on a vacation in 7 years) hopes to do some travelling, “maybe Italy – I’ve been very inspired by Italy.  At the end of the day I want to retire and cure meats – have something like Armando Batali [Salumi, Seattle] – a takeout deli, cured meat operation.  I’d love to write a charcuterie book one day when I’ve figured out a lot more things.  I don’t think there’s a lot of information out there.  Some people think it’s a fad or trend – it may be a trend right now in Toronto – but preserving things is thousands of years old.  I’ll always want to eat cured meats and I think most of the city will.”

Follow van Gameren and updates about The Hoof at http://www.charcuteriesundays.blogspot.com/

Renée Suen is a food loving freelance writer and photographer based in Toronto. Her insatiable appetite, curiosity and camera are often found travelling around the world in search of memorable tastes and the stories behind the plate. In another life, she is a PhD candidate in Cardiovascular Sciences.
View all posts by Renée Suen »
« Is Toronto world-class for food?
Victor Barry »